State of the Art Feed System at Oak Creek

There are so many deer gimmicks on the market, it is hard to weed through what works and doesn’t work.  Oak Creek has always tried to keep it’s nutrition levels state of the art and on the cutting edge. At Oak Creek we have never used any feed enhancers in our feed so we have no true statistics to answer that question, but what we have done is try and give our deer a good balanced diet. If a deer is healthy they will put most of that energy into their horns.

We have researched  a lot of  deer attractants and enhancers and I do believe there are some out there that do work really will.  I really like the ones that give the deer a nutritional edge or the ones with probiotics in them.  Probiotics really give the deer an extra advantage utilizing the nutrition they have at their disposal.  Our personal experience though is if you give them a good balanced diet and supplement what they don’t have available then you will have good healthy deer with big horns. 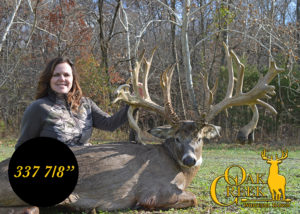 This year at Oak Creek, we took our nutrition levels of our feed to the next level. Deer are browsers and are not meant to live off of grains alone so it was only common since when we started investigating new feed alternatives and switched to a new feed system. Last week, we told you all about the Total Mix Ration (TMR). By combining the TMR to our new state of the art fodder building, we believe not only have we finally found a feed package the deer are really attracted to, but it also gives them the most balanced nutritional package they can digest.  We have observed a noticeable difference in their total over all health.  They seem to act and feel better, their hair is slick and healthy looking.

State of the Art Feed System

So, when we mention fodder the most common response is “what is fodder”.  Let us explain, Hydroponics fodder is young tender grass grown from a cereal grain mostly barley, we are using wheat and sunflower seed right now. In essence it replaces whole grains, commodities like dairy meal, pig’s feeds and poultry feed concentrates. Globally, hydroponic fodder is considered to be the best livestock feed. While it isn’t real popular in the United States yet, other countries like Europe and Australia use it regularly.

We researched all of the major companies in this field and every time we came back to Fodder Works.  Talking to Kyle and Kurt at Fodder Works made our decision very easy.  They were very helpful and full of insight.  They came out and built our system from the ground up and stayed until we were up and running, making sure we were very comfortable and have continued to help with any questions we have.  Both have been so knowledgeable in what they were promoting. We definitely made the right decision in going with them.

Oak Creek’s system was setup to produce a little over a ton of fodder a day at full operation.  We are operating at just over half the system and producing around 1550 lbs. of fodder from roughly 220 lbs. of seed.  Each mat of fodder weighs around 19lbs on the sixth day of growth, breaking down to approximately 1 pound of seed producing 7 pounds of feed.

People ask us all the time, why go through the trouble to grow the seed out, and why not just feed the wheat seed.  Growing it out does a couple different things for the animals.  It takes the complex starches and makes it into simpler more readily available sugars. This means the animal uses less energy to metabolism it.  The deer also gets roughly two gallons of water out of each mat, meaning the animals are staying hydrated easier during the hot summer days.  Fodder also does one more thing that most nutritionist can’t explain, but it makes the animals rumen work more efficiently; this means that you get the same result out of less feed. In the old system, we where feeding roughly 6 pounds of grain a day to the deer.  Now we are feeding roughly 4 pounds of feed per day, and the animals look better then ever.

If you would like to see the vlog, Donald and Nick go through from start to the deer eating it. The On The Ranch vlog comes out each Friday at 8 am. Click on the play button to watch Episode 5b of On The Ranch, All about Fodder.

There is a subscribe button at the end of the video. Click on this to link to the Oak Creek YouTube page, so you never miss another video from the guys at Oak Creek. You can also click on the video playlist links at the bottom of the video. These will take you directly to that playlist.