Shed hunting season has come to a close 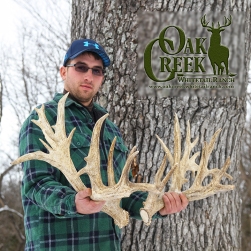 Shed hunting has become a huge event in the year for many avid whitetail hunters. From 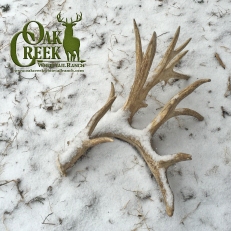 bucks they may have seen during the last fall to ghosts that may have never been seen at all, starting in January the hunt for white gold begins and it seems in a flash it is over.

Here at Oak Creek it is no different. We begin to find sheds of the monster bucks in early January. With the first find, the anticipation of what could be waiting for us each day puts a little bit more bounce in our step.

This season we had been watching some younger bucks that were already giants, and would not make the hit list here at Oak Creek. They were some of the largest young bucks we had ever seen in the 20 plus years we have had the ranch. We anxiously watched the trail cams hoping for a glimpse of these young monsters. The first set of sheds we found measured in at over 195″ typical. We had seen this deer a few times during season and guessed his inside width to be over 30″. We are so excited to see what this 225″ inch typical will do next season, since he was no more than 2 years old this time.

As the last two months went by we found many more huge sets and singles. The largest going well over 300″.

What was your nicest find this year? Post in the comment area, we would love to see how everyone else did.