Doc and Pops take on the deer world!

Doc and Pops take on the deer world!

On September 13th, Doc and his father Pops came to take on Oak Creek. With light fading fast, Ryan broke out the Hoyt and flung a few confidence arrows down range! With the shooting adequate, we hit the field. When there is going to be a bow hunter in camp, I always find myself a little hesitant. Often times, die hard bow hunters are hard headed and not susceptible to legitimate criticism. Doc was not that guy! He eagerly learned and readily tried his hand at bow hunting for the first time. Mentoring and teaching people the knowledge I’ve learned is why I got into guiding in the first place. Let’s get started!

The first morning we sat in a double wide ground blind with very little action. We saw very few deer.  Honestly, I was a little let down as I knew there were a ton of deer piling into this clover just days before. Doc and pops never let that get them down. They joked and carried on about all the worlds problems.

The afternoon of the first day we went to the same blind. Some does and fawns filtered into the field when I got a text from Jesse. It was a video of the deer that I had been scouting and we were just on the wrong side of the creek from it. That evening more and more deer filtered in with no sight of a big buck.

Talking with Jesse after dinner, it turns out that the deer I had been scouting was in front of him all night. I knew then, I needed to throw a change up. That night I recruited Ryan and we moved the double wide pop-up across the creek to the other field. 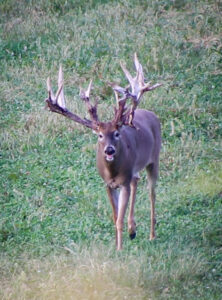 Day 2 came along and I was feeling confident that the deer would show up and have to walk a mere 20 yards from our blind. Sure enough at first light, a big typical buck walked over the horizon and not long after, the big nontypical followed.

They must have had a territorial dispute going on. They ran everywhere and even right down our shooting lane, but moved away too quickly. After all the deer filtered out of the field and mid morning came, we headed back to the lodge for some of Dustin’s breakfast!

We See The Buck!

That afternoon, we got out a little earlier than usual. With the deer we were after being in that area, I did not want him coming in before we sat up. Sure enough as we got into the blind and started unzipping windows, here he came right towards our shooting lane!

We didn’t even have the door zipped shut! I told Doc, “you better knock an arrow because he is coming quick.” Sure enough, he came right to our shooting lane, but he knew something wasn’t right. The night we put the blind in, I made a mistake and drove into the high grass where we put the blind. Never again will I do that. As the buck closed, I thought we had it perfect.

I told Doc to draw as the deer was about to step in front of his window. Instead the deer stepped down the tire tracks and got too close. He knew something was not right and trotted off. I tried to stop him, but with no luck. Doc took the shot. It was an opportunity, Doc could not let pass. We both learned a lesson that day. Unsure of the shot, we snuck out and headed out. 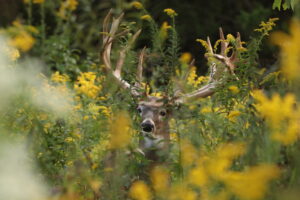 The pressure was on the last day. Climbing back in the stand that morning was the best chance we had. If he didn’t show, put the dogs on the last spot we saw him.

After sitting with no luck and decided that it was time to call in the dogs, Donald arrived with Ace. We set out to get in front of them and wait to hear Ace bay something. It wasn’t long until Ace was hot on the track of a wounded buck.

We arrived to find the deer that was in the territorial dispute with the one we were after. He was wounded and after coming up with a plan, we harvested that deer. He was amazing! Ryan took that deer back to the lodge and the hunt was on for the giant nontypical.

While breaking for lunch, Ace found the deer. The buck moved into a thick persimmon patch in the middle of the field we hunted day one. After a stalk and we waited for a shot opportunity. Doc made a great shot. After a short track job, we found the deer. Still on his feet, Doc harvested him with a final shot.

Finally this beautiful creature was down! We were a little later than we had hoped to get Doc and Pops on the road, but hopefully momma wasn’t too mad at me for holding them longer! The rest of the Oak Creek team helped me get them loaded up and ready.

This hunt is unforgettable! I learned a lot on this one and I know Doc and Pops did too. Aside from the hunting, these father son duos always amaze me. They always remind me of how my dad taught me to hunt and fish. Often I reminisce on those times and am grateful for every one of them. I pray that this duo has many more miles and harvests ahead of them. I am happy to have been a small part of all the smiles that week! 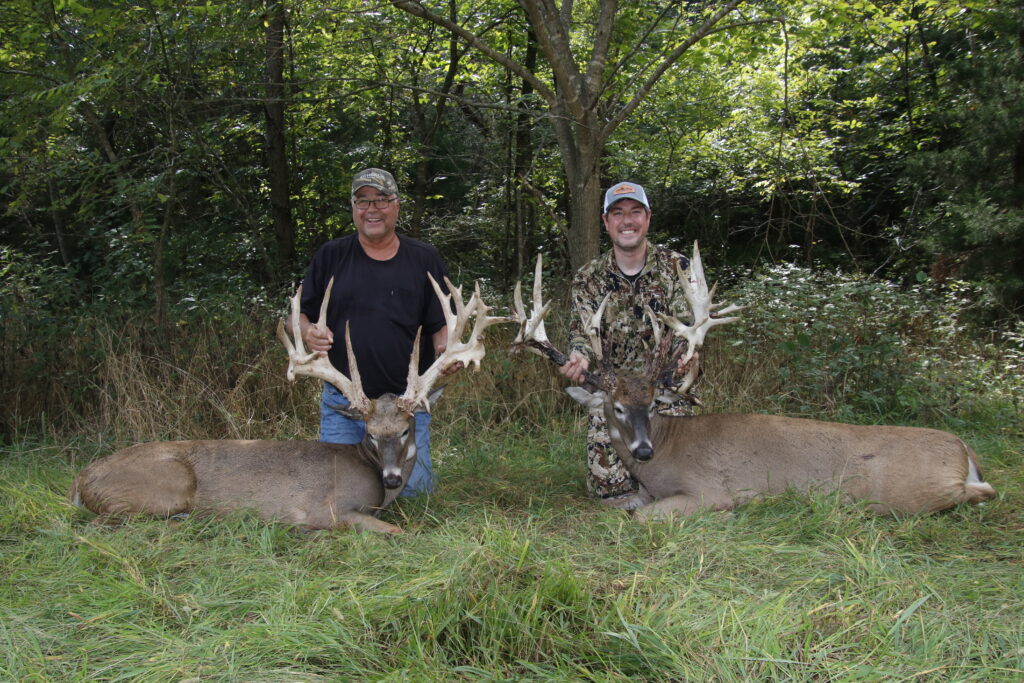 Make sure to check the rest of our website at www.oakcreekwhitetailranch.com. If you aren’t already, join us on all the social media outlets. Make sure you never miss a thing from Oak Creek.