“What are those? Bathmats of some kind?” I asked of the neon green sheets of what looked like squares of Astroturf stacked in the back of Oak Creek Whitetail Ranch Assistant Manager Jacob Osborn’s truck.

Jacob responded that they were feed then pulled off what still looked like to me a piece plastic foliage and ate it.

As Jacob didn’t gag, I surmised that it was “good stuff” or that he had an affinity for plastic.

Jacob might be a candidate for the TV show My Strange Addiction where people uncontrollably eat really weird things like glass, bellybutton lint, and wads of hair taken from the bathtub drain.

I took a piece and nibbled it. 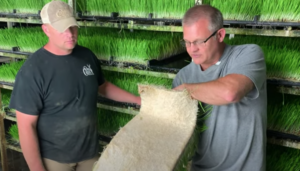 And apparently how it was grown and what it does for deer is all part of the magic of how Oak Creek Whitetail Ranch grows such huge deer.

“I don’t know where I first saw it,” Oak Creek Whitetail Ranch Co-Owner Donald Hill explained to me. “I think I saw it in a magazine. Regardless, the process is from Australia. Cattle ranchers their use it to help marble their meat.”

The process to which Donald was referring to involves growing barley on what looks like large plastic cafeteria trays completely inside utilizing hydroponics. Utilizing this method, one pound of barley seed can make just over seven pounds of fodder for $3.36. The end result is a thick mat that deer literary have to pull apart. The feed is about 90% water and helps drive fat content into the meat.

“We utilize it for two reasons,” Donald explained. “The first is that it drives fat into the meat so instead of just exterior fat you have fat content within the meat. This makes for a better tasting deer. The second is that we use it in our breeding pens. We put it out…the deer come out to eat it and we can inspect them at a distance for their health.” 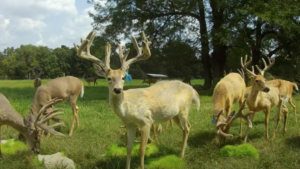 Given my mistaking the feed for as some sort of bathmat, it goes without saying that I’ve never seen this food source on any other ranch. Regardless, it apparently does wonders as I’ve also never seen bigger or had better tasting deer than I have at Oak Creek.

If you would like to watch a video to learn more about the fodder system at Oak Creek Whitetail Ranch click the link below.

Also make sure to check out Gayne C. Young’s other writings. He is an accomplished outdoor writer and author. Click here to go to his website!